Targeted Strength and Conditioning gets a New Look! - 50/50 Fitness/Nutrition

Targeted Strength and Conditioning gets a New Look!

Targeted Strength and Conditioning: Looking back and the road ahead!
Wow, I cannot believe this small group offering Targeted Strength and Conditioning has been taking place for a year and a half now! What a time full of positive experiences and transformations.  Thank you to everyone that has and still is participating.  I am excited to offer some new changes and developments to this program.
It is quite amazing to think that this program started with a couple of you that needed a strength training session that worked with your schedule.  This program began as one Small Group Training that took place outside with a few 8lbs and 10lbs dumbbells.  In just several weeks, that small group began to grow; the sessions began to resemble nothing that many of you had experienced before at 50/50.  That Small Group Training began to get a “following”, it grew, another group later developed and Targeted Strength and Conditioning was created.  In a year and a half, I have trained approximately 30 individuals without injury, and with much strength, fun, and camaraderie.   In this article I will give a brief overview of the new structure, some information on strength training, and how to use this program to better meet your strength goals, using the pull-up, one of our core moves, as an example.

Targeted Strength and Conditioning is now a six-week strength-training program, where it had previously been a sixteen-week program.  This will allow for those interested in participating in the Targeted strength training program an opportunity to join sooner.  This program has eight core movements throughout the six weeks: Core, Arms, Vertical Push, Vertical Pull, Horizontal Push, Horizontal Pull, Knee dominant, and Hip dominant.  Also, I have freed up 15 minutes at the end of the session to allow each group to work on their own unique six-week goal. For example, one group has chosen to spend the next six weeks focusing on lateral movements to strengthen their legs for the upcoming ski season! The main exercises will change within the six-week program every two weeks to keep everyone engaged, while maintaining the effectiveness of Progressive Overload. 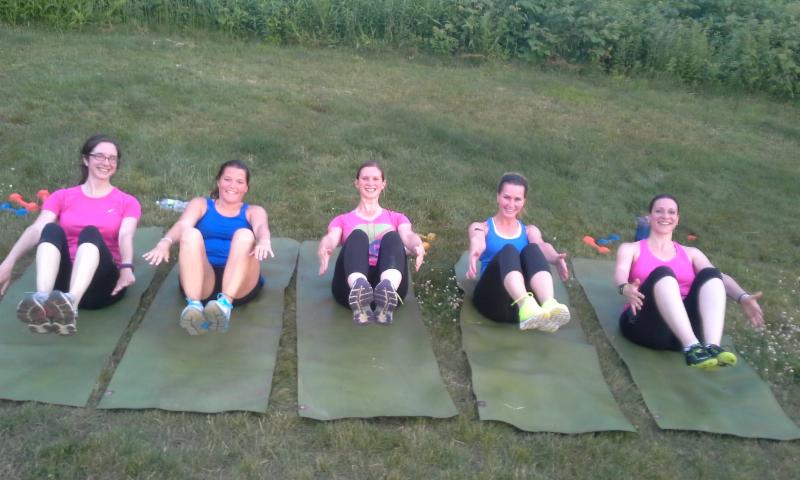 The American College of Sports Medicine (ACSM) published an official-position paper in favor of progressive overload for resistance training in healthy adults, and a 2015 study published in the journal Frontiers in Physiology found that the best endurance athletes in the world follow progressive overload’s principles.  Using Progressive Overload you work a specific muscle or function (i.e., squat or pull-up) in a specific manner, progressively adding intensity and/or duration over time. We use these principles in Targeted to safely build strength. For success repetition and consistency are key. Results don’t occur overnight but after months, and for some even years.  The pull-up provides a great example of this principle.
How can I develop the strength to do an unassisted pull-up? How do I know how many reps to complete? In general, a goal of 8-10 reps of a weight is a good rep range for three sets of an exercise.  A rep range of 6 reps of a heavier weight is better for gaining strength.  It is important that at the end of each set, you feel as though the last rep was challenging to complete, but not impossible.  We use a thirty-second rest period for recovery, you should need to use that rest period.  The pull-up/chin-up is one of the hardest exercises to complete.  We use assistance with resistance bands.  The blue band offers the most assistance, and the green band a bit less.  Beginners should strive to complete the 8-10 rep range with proper form, to create muscle memory, better prepare the joints, ligaments, and tendons for heavier resistance.  As you gain the ability to increase your number of repetitions past 10, use a lighter resistance band and work your way back up to 6-10.  Continue this, along with eccentric pull-up/chin-ups, and practicing holding your body weight unassisted in the top and middle part of the pull-up and chin-up movement.  With pull-ups and chin-ups it is imperative to practice attempting an unassisted pull-up sooner rather then later.   It is so gratifying to me to see our members progress to unassisted chin-ups and pull-ups. Many of you have and many are so very close; keep up the great work!
Meet your Health & Fitness Specialist

Join our Newsletter!
For Email Marketing you can trust.